The winner of The Dr. Cyril Hart Memorial Award for 2013 is Dr. Scott McG Wilson, an independent Chartered Forester and consultant forest scientist based in Aberdeen. His paper, “Adoption of alternative silvicultural systems in Great Britain – A review” was published in the October 2013 issue of the Quartely Journal of Forestry.

Presenting the award, Dr. Chris Quine, the Chairman of The Scottish Forestry Trust’s Projects and Research Committee said, “It is very important for the Trust to see the results from research which it has supported being translated into practical findings of relevance to the wider forest industry. Scott’s paper was a particularly interesting example of this knowledge exchange and, very appropriately, covers an aspect of silviculture that was very close to the interests of Dr. Hart himself.” 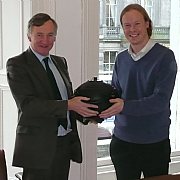 The winner of The Dr. Cyril Hart Memorial Award for 2012 is Hamish Mackintosh a postgraduate student previously based at the School of GeoSciences (IERM), Edinburgh University.

His paper, “Long-Term Survival of Saplings during the Transformation to Continuous Cover” was published in Forests 2012, 3. The paper was co-authored by Gary Kerr of Forest Research and is the first paper produced from Hamish’s PhD project on Developing the Silviculture of Continuous Cover Forestry: using the experience and data collected from the Glentress Trial Area.

The 2011 winner of the Dr Cyril Hart Memorial Award was Matti Salmella for his paper “Understanding the evolution of native pinewoods in Scotland will benefit their future management and conservation” published in Forestry, Volume 83, Number 5.