Carried out by: British Geological Survey

The main aim of the project is to improve the understanding of forests being planted or
conserved in view of mitigating floods, by understanding the development of optimum
characteristics of water flow and storage under three sites: heathland/pastureland,
mature scots pine plantation and ancient Caledonian forest. The study will test two
hypotheses:


1. As the forest develops, the root system of the forest creates macropores and
increases organic matter optimising water flow and storage.
2. Springs develop under mature forests because the forest interacts with and
adjusts to the environment to form perched water tables.


The project will compare the flood mitigation potential of forest plantation, ancient
forest and heathland by measuring in-situ permeability measurements at different soil
depths and investigate the presence of springs within the three sites.


This pilot study will also examine past climate and local disturbance to deepen our
understanding of forest ecosystem resilience. 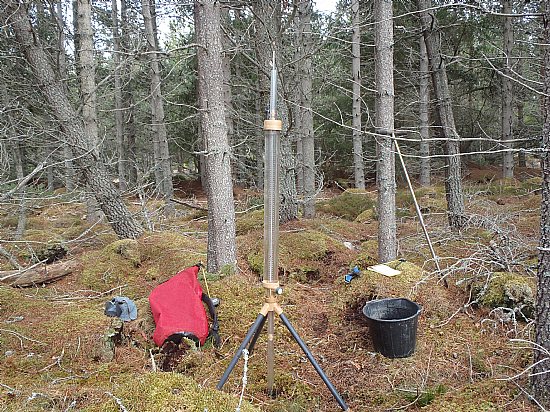 The study area is within the Rothiemuchus Forest approximately 2 km south west of Loch Morlich, near Aviemore in the Cairngorms. The main aim of this study was to improve the understanding of forest hydrology to contribute to a better management of forests (planting and conservation) in view of mitigating flood risk. To do this it was proposed to investigate water flow and storage and absence/presence of springs within two adjacent sites within the Rothiemurchus Forest. These two sites were plantation Scots pine (Pinus sylvestris): planted in 1971 and Old Forest Scots pine, initially planted or left to regenerate in 1750. The topography is comprised of undulating moraine deposits, creating hill crests and moraine depressions overlying the Ardverikie Till Formation on micaceous psammite (sandstone) bedrock. Soils are ferric podzols with peat layers.

Between the two sites it was observed that:

• Peat was significantly thinner in moraine depressions and thinnest on moraine crests.

• The density of trees in the Old Forest was significantly higher in the more freely draining moraine soils than the mire depressions between the moraine slopes.

• It was difficult to quantify the number of standing plantation trees within the moraine topography, but field surveys observed uprooted or windblown trees (blown down by wind) in particularly in moraine depressions.

• The occurrence of the Ardverikie Till Formation below the more permeable morainic deposits suggests that perched water tables occur in the boggy depressions in the moraine topography, because the less permeable layer of Till prevents water drainage. Also within the moraine slopes fine compacted ‘lenses’ of sediments occur from glacial retreat and ice melt.

To further investigate the possible reasons for the above observations, the two sites were instrumented with soil water sensors and rain gauges. Soil and vegetation depth was investigated by auger cores and the use of an avalanche pole. Field saturated hydraulic conductivity was also measured using a systematic random design.

It was observed that the Old Forest site had significantly thicker soils, and understory cover than the Plantation site. Cumulative ground-level rainfall recorded in the Plantation site was 15% less than the Old Forest, suggesting that the dense plantation canopy intercepted rainfall, causing water to be stored and evaporated from the plantation canopy, reducing the quantity of water entering the soil. Field saturated hydraulic conductivity (Kfs) measured by a Guelph constant head well permeameter was used to estimate the soil’s ability to transmit (infiltrate) water. In the Plantation site median Kfs was 0.13 cm/min with a narrow range of values (0.002 to 2.4 cm/min), whilst median Kfs measured in the Old Forest was 0.57 cm/min (wider range 0.00004 cm/min to 4.8 cm/min). In the Old Forest, Kfs values were significantly greater within vegetation/soil mounds, than depressions, whereas in the Plantation site there was no significant difference of Kfs between depressions and soil/vegetation mounds, where drainage lines were a dominant factor within the slope topography. A topographic study of the both sites showed that the dominant water flows were downslope towards bog areas in moraine depressions. Soil water contents in the Plantation responded to rainfall events and drained relatively quickly corroborating Kfs measurements, whereas the Old Forest demonstrated diverse responses to rainfall events. The majority of soil moisture sensors did not respond to rainfall, but were buffered by vegetation cover, although responses to rainfall were rapid in areas of sandy gravels.

In conclusion, the Plantation tends to have drier moraine slopes (to 0.4m depths), not conducive to spring development, because i) the dense canopy intercepts a component of rainfall, ii)_there is significantly less understory vegetation and thinner soil, leading to rapid infiltration through the permeable moraine substrate, which drains towards moraine depressions.

The reasons for significantly thinner soils in the Plantation site could be due to a number of combined reasons, such as: 1) During the implementation of drainage and tree planting, the peat soils became disturbed and vulnerable to erosion by the increased amount of water flow through the newly installed drainage. 2) The loss of shrub canopy through the process of tree planting exposes the soil to erosion and as the plantation grows the loss of understory biodiversity, causes the soils to become eroded particularly under high rainfall. 3) With increased infiltration rates, the soils are more highly drained, causing the water table to lower. The peat then becomes drier and oxidization of the peat occurs, lowering the depth of peat.

Further research is needed to understand such significant differences. The significantly deeper vegetation understory and soil thickness developed in the Old Forest provides greater diversity of Kfs allowing infiltration of rainfall and water storage. Thicker forest soils store more water, because they are more aerated than mire peats (Kurbatov, 1968) and therefore act as a “sponge” to store rainfall. Spring development is dependent on impermeable substrate layers in moraine deposits, such as those occurring in the Cairngorms. However, if these layers are thin, they can be easily broken by ploughing. In the Old Forest, the dense understory of blaeberry, bearberry, heather and sphagnum may protect these impermeable layers, where water accumulates as springs/seepages. Even though Kfs are significantly lower in the depressions than the vegetated mounds in the Old Forest, water will continue to flow towards springs under gravity, creating a constant water supply for spring flows.

This study was unable to find evidence that the Old Forests interact with the soil and shallow geology leading to the occurrence of springs. However, as this study is the first of its kind to investigate spring development in relationship to forests in Scotland, it provides the basis for further research. Future studies should consider how soils form through forest interaction with the surrounding geology (parent material). Where the geology or soil parent material is relatively impermeable, perched water tables are likely to occur, leading to local spring development.